Like what I'm doing? What about join me as a Patron and have a lot of perks and rewards?

I just finished refactoring and redesigning the Star-riding mechanic. I changed the animation direction, from frame-by-frame to cutout animation. If you want to know how I make Cutout Animation characters, you can check out the Bard's Lesson Cutout Animation post I made, make sure to check out the comments, there are some useful tips there as well.

Due to that change a whole new world of possibilities opened, I was able to separate the sprites and animate them independently, which led to the following awesome swing effect when the mouse rides a star:

Alright let's dig into the SwingPivot to see how I made this effect, by the way the source code is at the bottom of the post as well.

The idea behind this class is that it will give an inertia looking to its children.  So it would pick a movement velocity, i.e. a Vector2, and would rotate according to the movement direction, flipping horizontally depending on the horizontal axis of the movement. It also takes an angle offset, it is useful depending on the children's angle, for instance the Astromouse technically is rotated 90 degrees. It also has a is_swingging control variable and a damping, which is used to damp the swing to its resting angle. 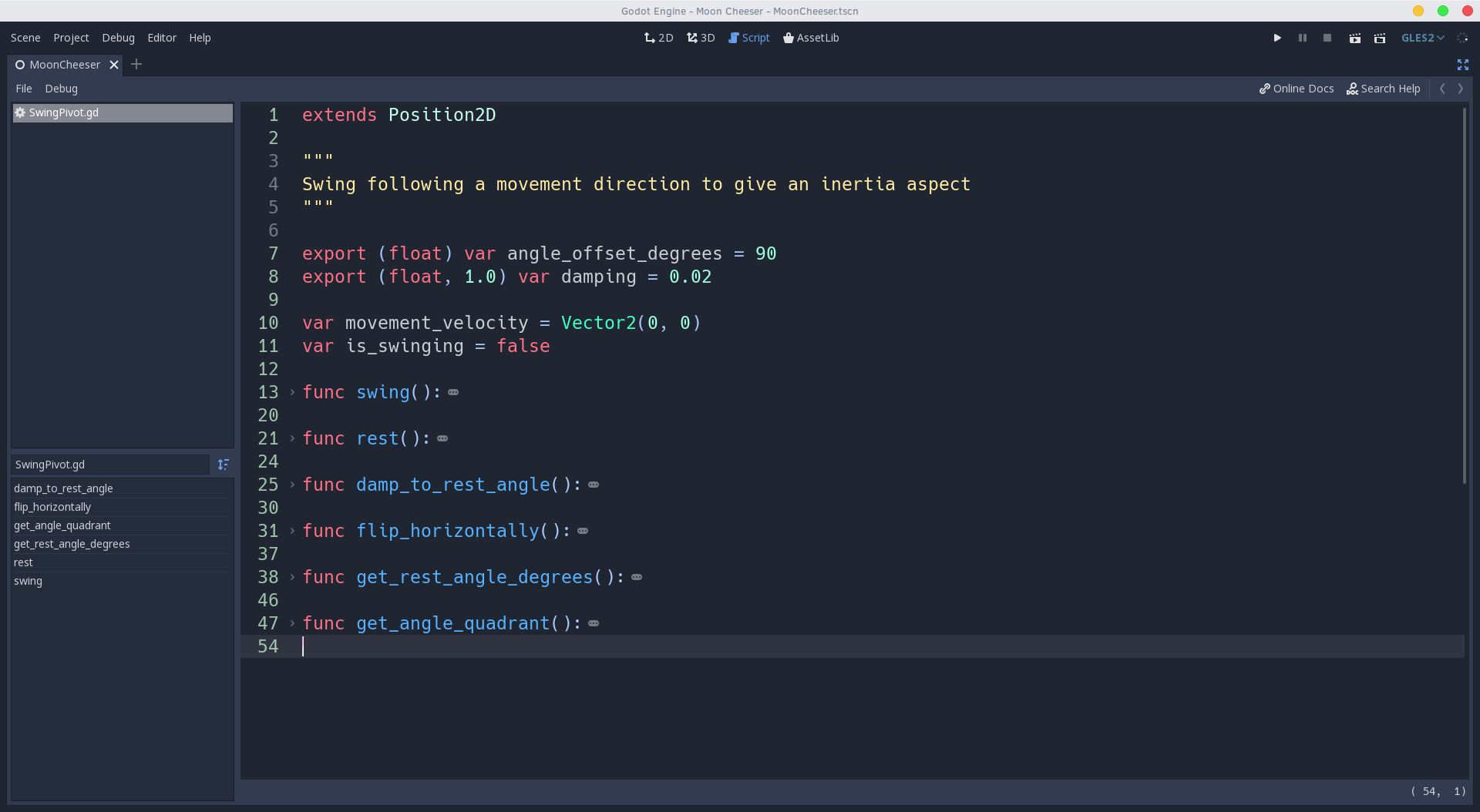 To make the swing movement is very simple:

Getting the Movement's Angle

Every Vector2 has a method that will convert it from a Vector to an angle in radians. Well, since I can't reason in radians, I convert it to degrees to reason about it better. 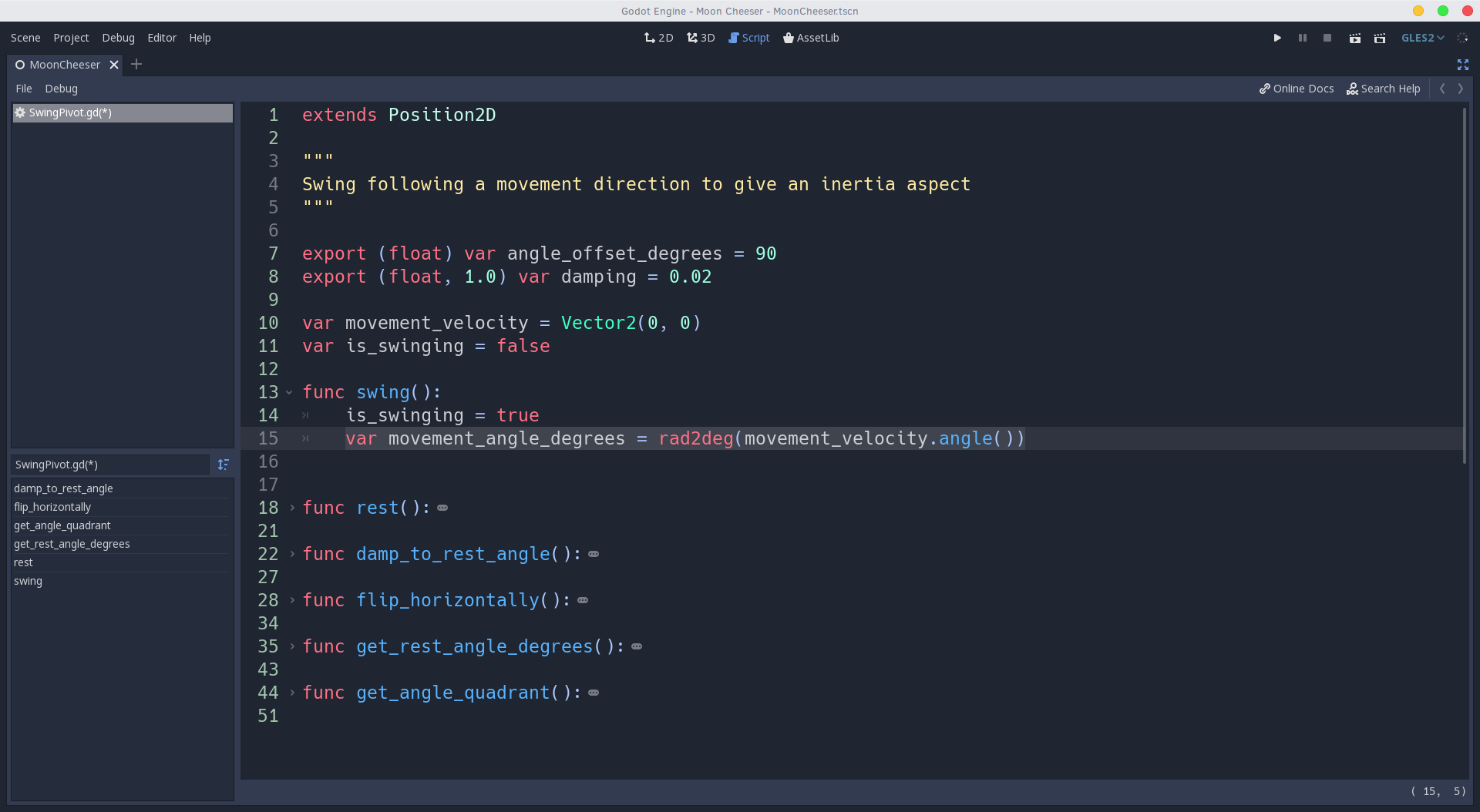 I think this is not as important but it is a corner case for me, this helped make the Astromouse angle follows the movement angle. I think this could be 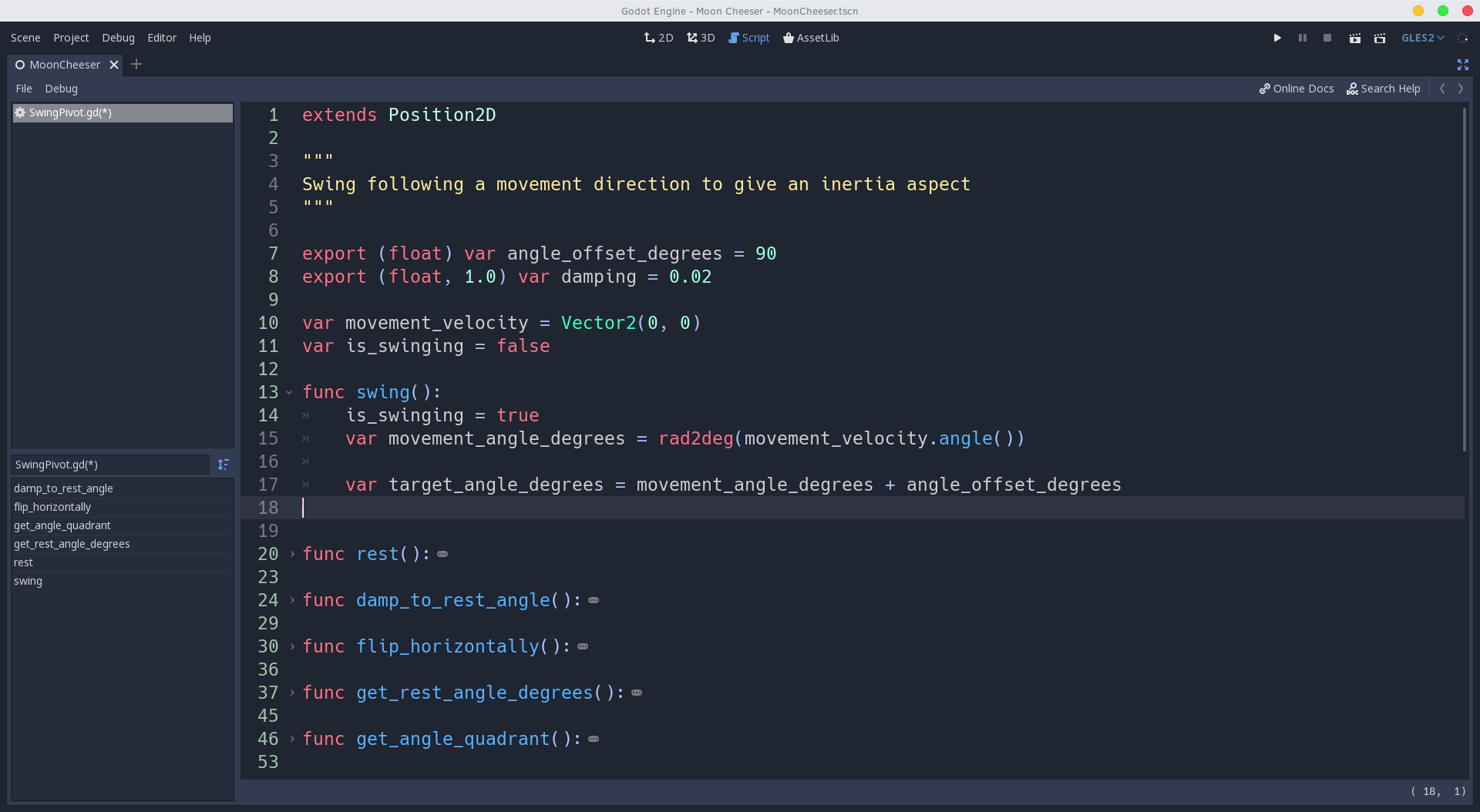 Applying the movement's angle and flip

Then we just need to apply the resulting angle as the rotation of the SwingPivot and flip horizontally if needed. The flip happens depending on the movement horizontal velocity. If it is towards the right, no flip, otherwise flip 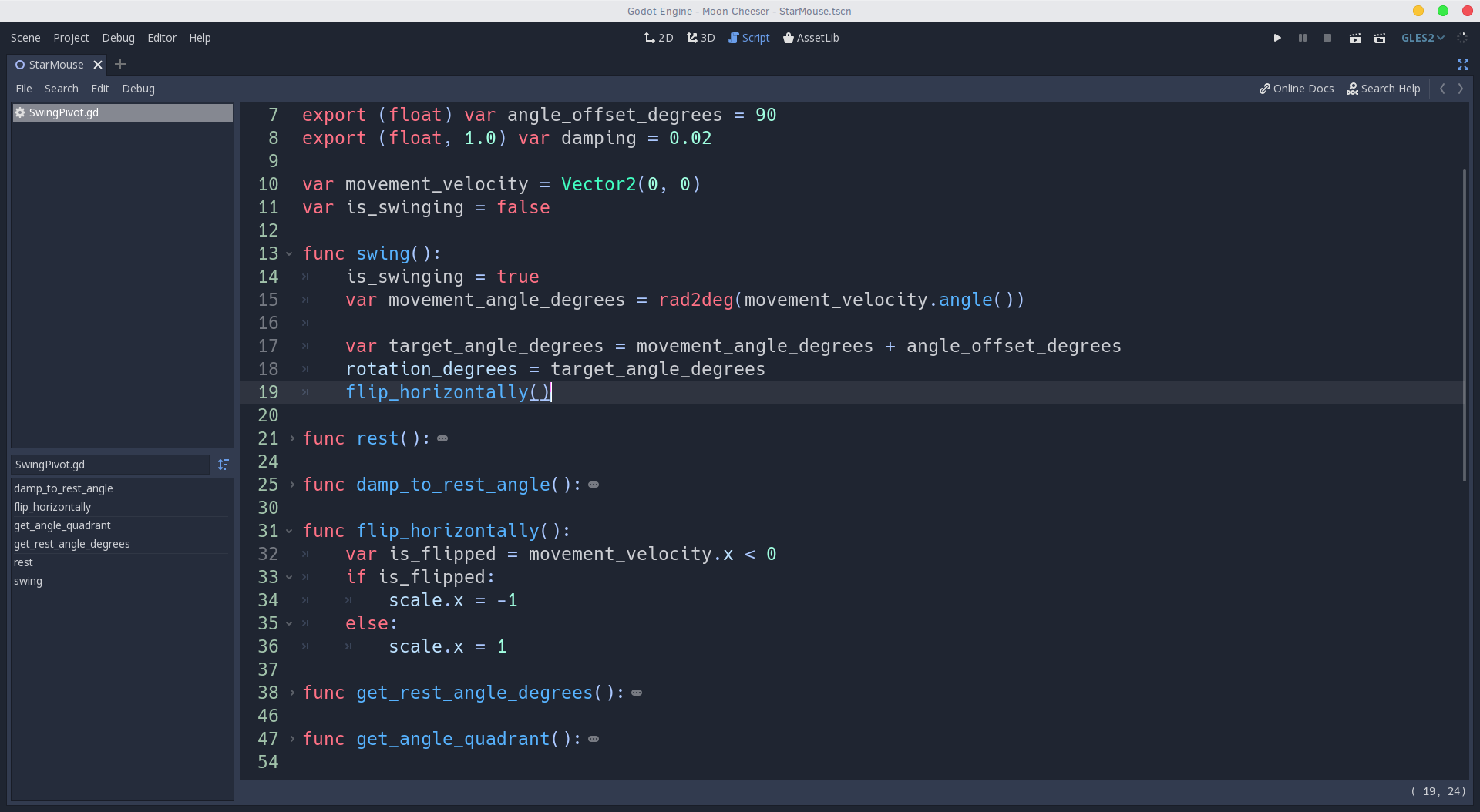 That's all for the swing, quite easy to be honest. The really hard part is to make it rest.

To rest there are way more to care about

Getting the Rest Angle

The resting angle is, for the context of the game, always either 0 or 360, this is because of how the resting interpolates between the current angle and the resting angle. It could, in theory, always be 0 degrees, but if the rotation was in 270 degrees the character would make almost a whole spin, instead of rest towards the angle, so in that case it should interpolate to 360 which is the closest to 270.

So to make the SwingPivot rest proper, we must return the either if it shall rest to 0.0, spinning to the left, or to 360, spinning to the right. For that we just need to check if the movement is towards the left and towards the bottom. To apply this filtering I just made a ternary operation, I think it is quite readable, so is OK to me, but I'd like to know your opinion on that. 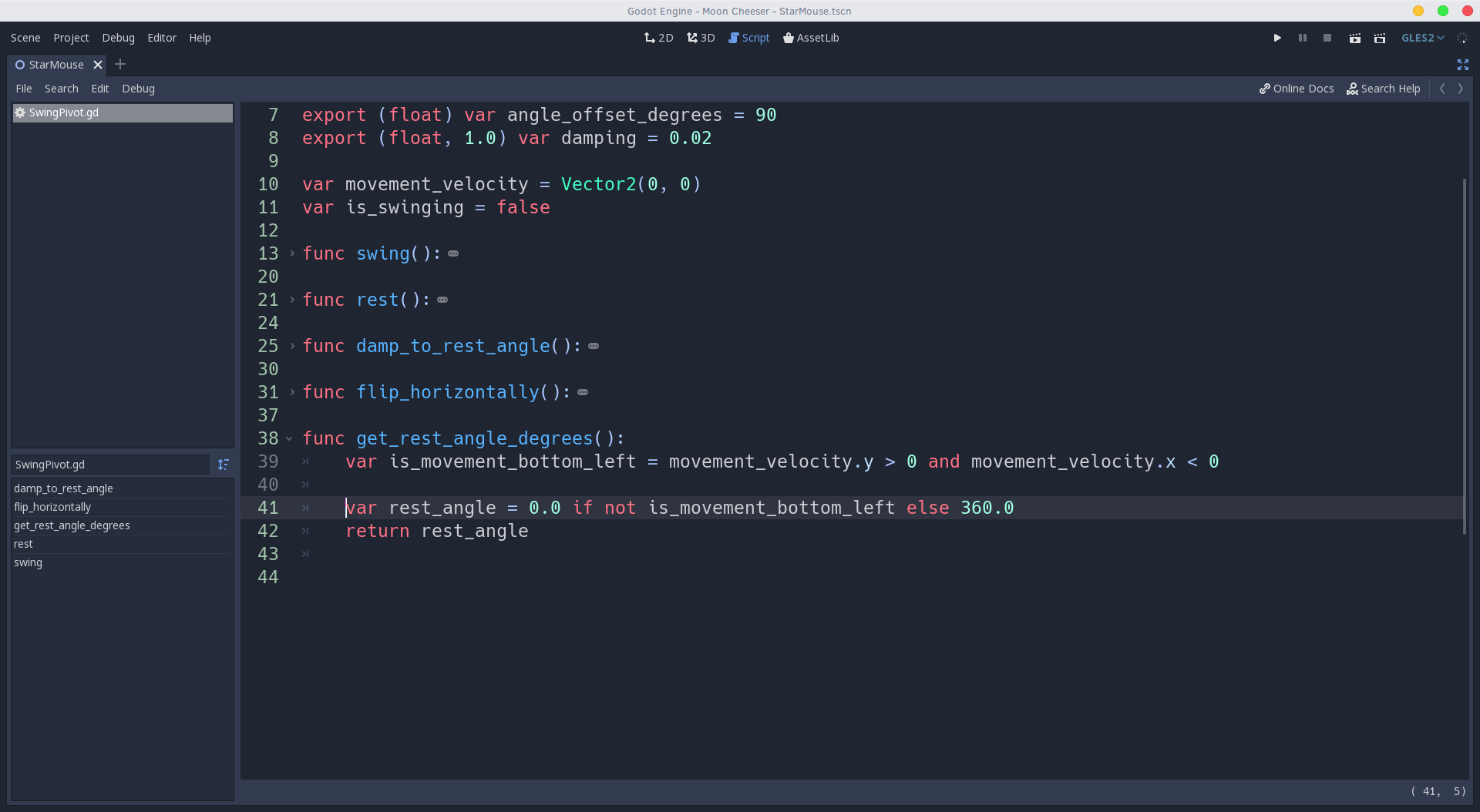 Damping to the rest position

To make the SwingPivot damp to its rest position is quite tricky. I didn't want to use any process function for that, like _physics_process, instead if it isn't swinging, remember the is_swinging control variable, it should damp to said rest position. To do that I used a while loop which yields for the physics_frame to render, on each iteration of this loop it would linearly interpolate the SwingPivot's rotation towards the rest angle by a given percentage, stored in the damping. That's why the damping has a max of 1.0, which is 100% per frame, meaning it would immediately rotate to the rest angle. 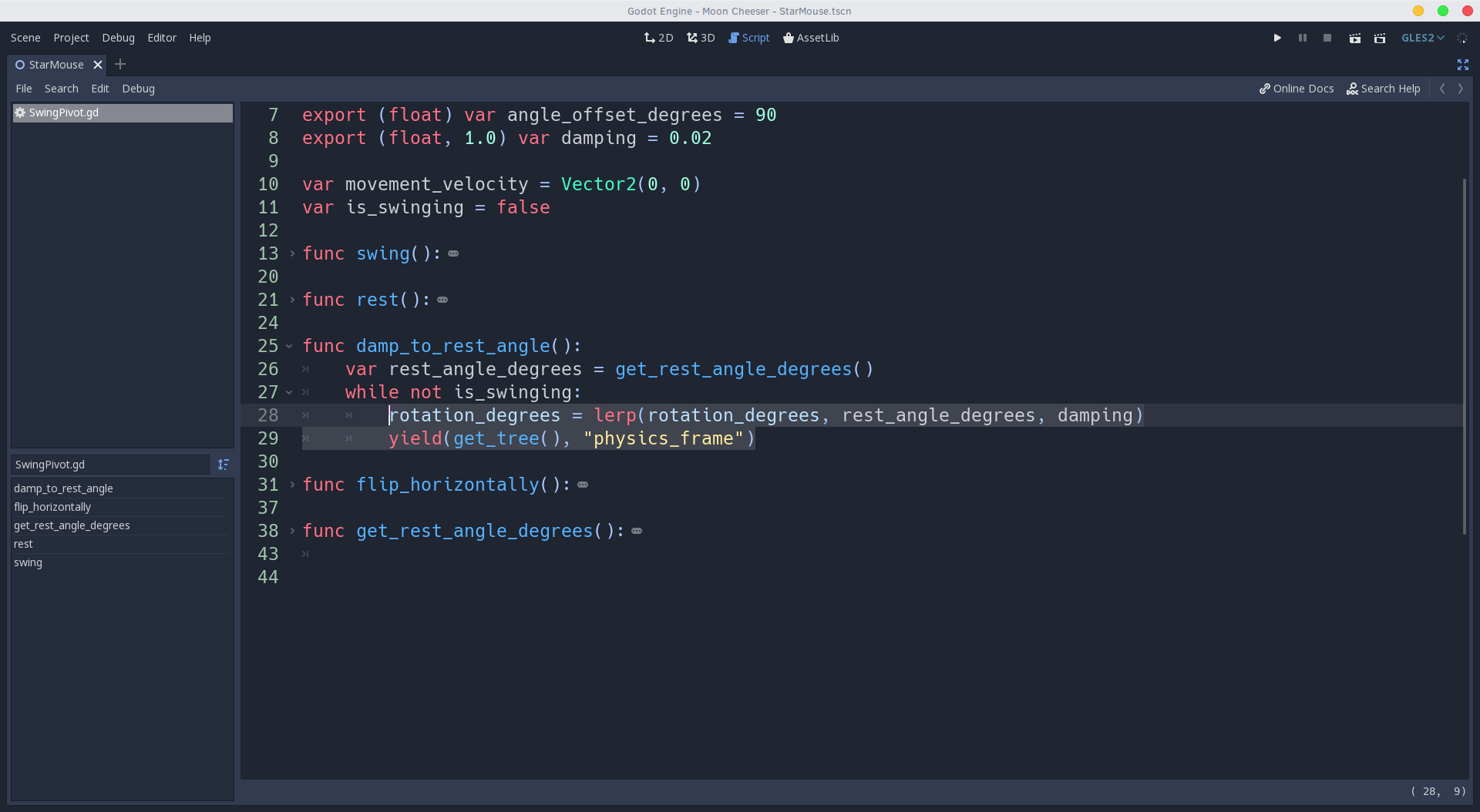 And that's all, that's how I achieved this awesome swinging effect to make it feel like the Astromouse is taking a ride on the stars.

Is it possible that somewhere in the space there's a moon made out of cheese?