In Bard's Lesson the main mechanic is to play the piccolo, a windwood instrument, and in the game's world this piccolo has three pitches that together build up a C Major chord. But if you check the game's source there's only a C5 sample being used in the game. So how do I managed the pitches?

Turns out that Godot Engine 3.0 has a really powerful AudioServer, the class in charge of handling audio related stuff. In the current release, Juan Linietsky built a new audio system from scratch, which turned out to be the most feature complete audio system among the game engines I know (and the range isn't by far small).

From within the AudioServer a Godot user can build up his/her own mixing table. 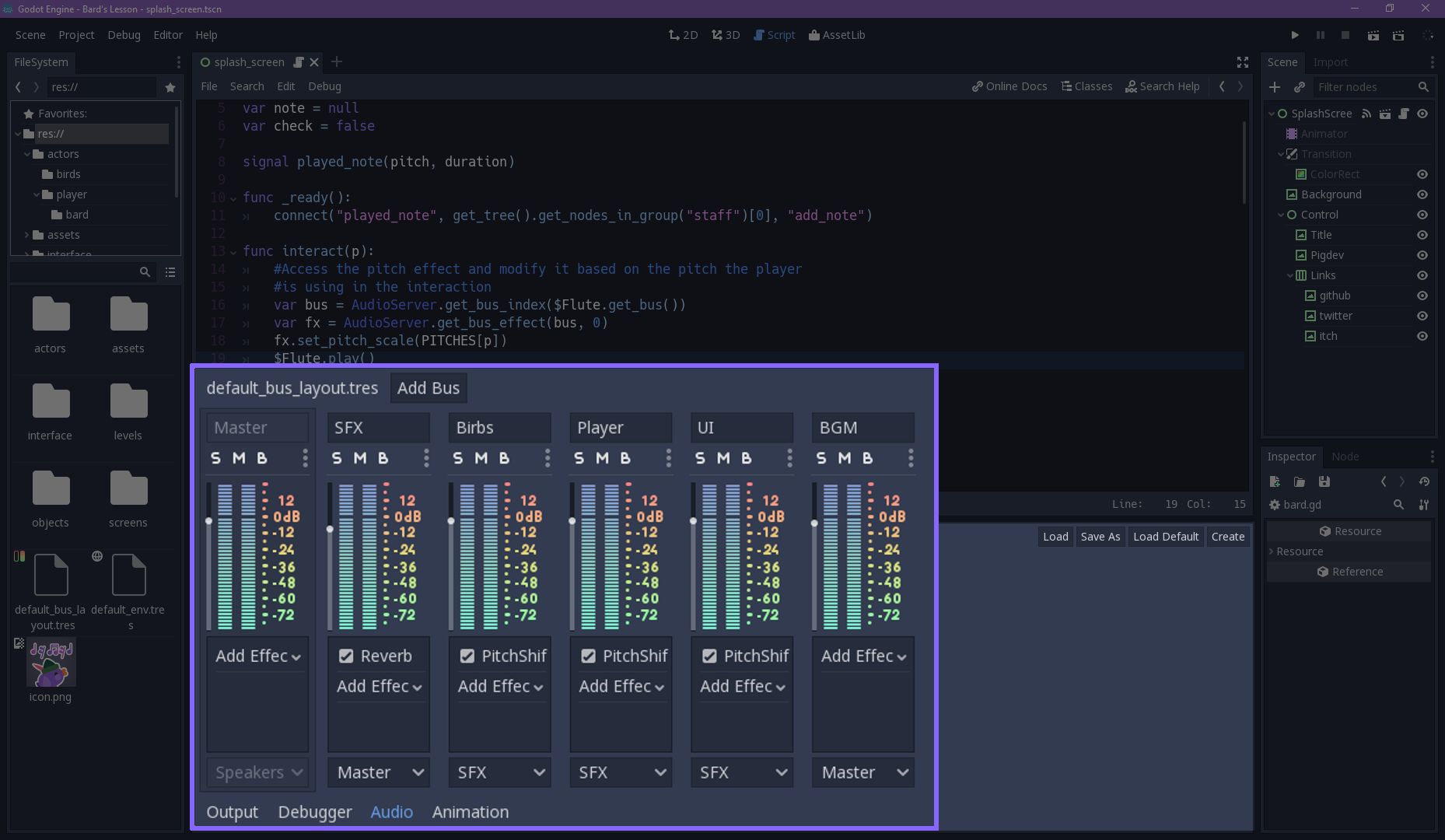 As you can see there is the option to add many Audio Buses, an AudioBus is a system that communicates audio data within the AudioServer, in such a way you can send audio outputs to the input of other buses, which will end being played in the Master Bus, the default and irremovable AudioBus.

There's something very important to know in forehand before you start working with AudioBuses in Godot Engine. The order matters, the arrange of the buses in the mixing table is very important because

They communicate from right to left only

But of course you can tweak with their index and move them from left to right and vice versa. 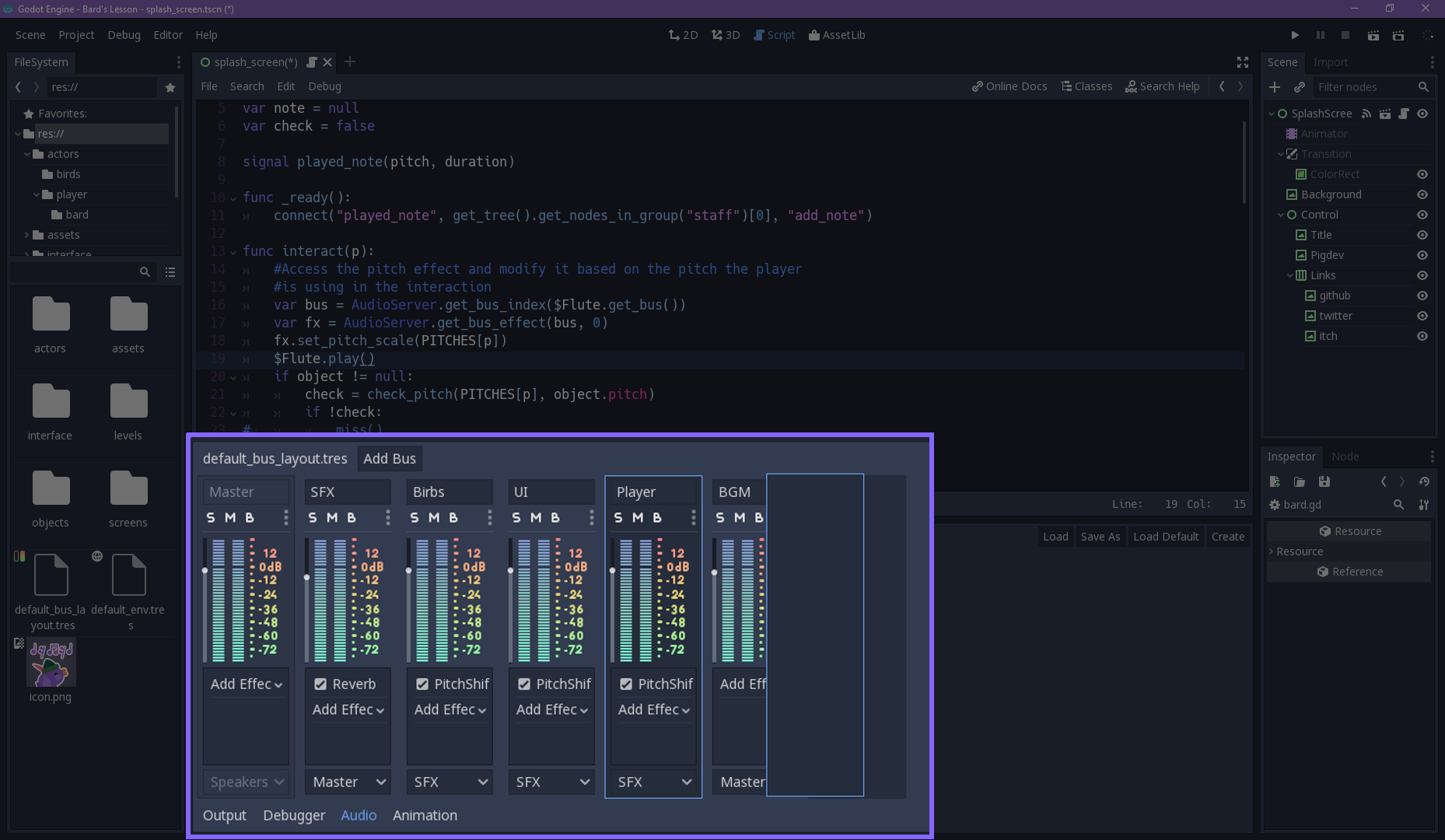 In this case I'm moving the Player bus to the end of the chain, this will enable the BGM bus to receive data from the Player bus, but not the other way around.

And to do this you just need to select from the bottom drop down menu, which shows the available buses, the one you want to send your bus' data to. 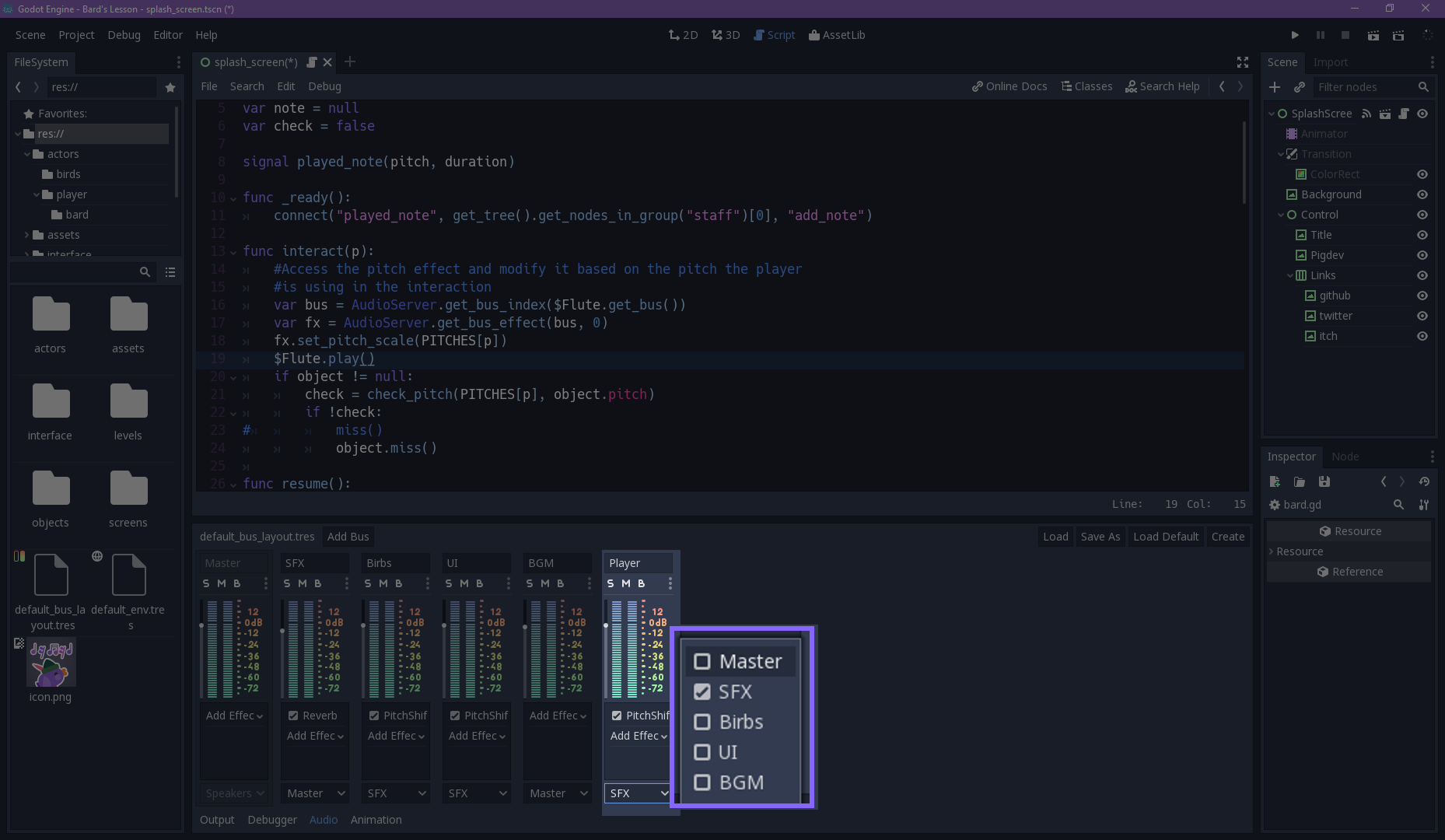 Why would I want to pass audio data using buses, what is this for?

Well there's a very good reason why this is VERY, VERY AWESOME. As you can presume, you can arrange the buses in many different layouts, which we call AudioBusLayout.

But the most amazing thing about this is that, since an AudioBusLayout is a .tres file, which means it is a resource, you can save as many AudioBusLayouts you want and even use them between projects! HOW...AWESOME...IS...THAT? You already figured out what's coming next right?

Now comes the best part, nothing of this said until now makes sense if you can't chain AudioEffects. Yep! In Godot we can make use of builtin AudioEffects, which range from simple Panner or Amplify to very complex and useful Filters or Equalizations and even... a Pitch Shifter.

From now on I'll presume you already blew up your mind thinking:

Yes...I know how you're feeling. But let's go back to the part where I show you how you can at least tweak with the effects using GDScript.

Well, as you can presume from the screen shots and this long introduction to the Godot's Audio System, to shift the pitch of the C5 sample used for the piccolo sound effect I just need to add a PitchShifter AudioEffect to the Player and the Birds buses. 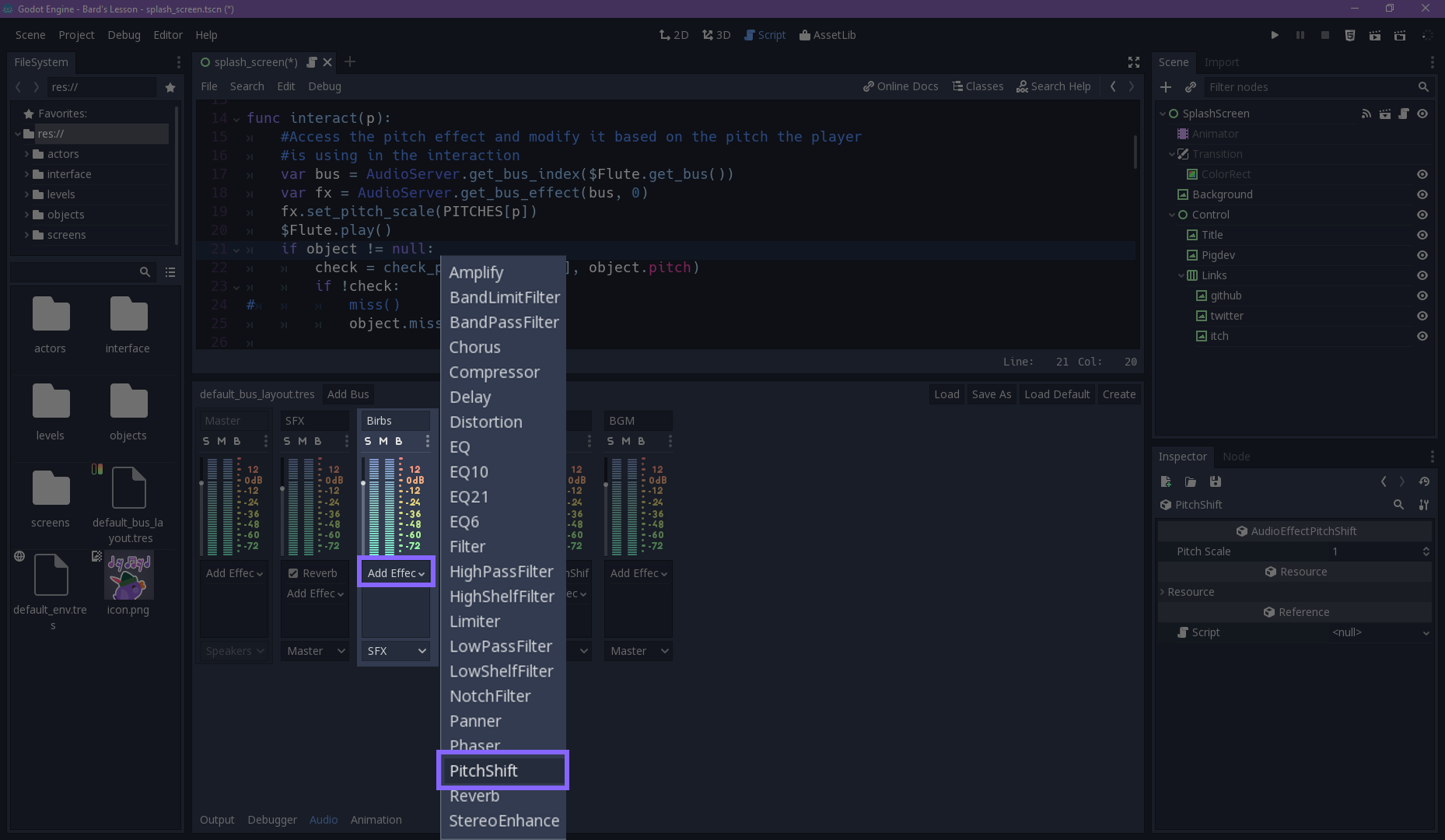 Now comes the fancy part. By using an AudioStreamPlayer2D (but this approach works with similar Nodes) we will use a block of logic to access its Bus, then we will iterate through it to look for an AudioEffectPitchShift, when we find it, we will access it and set its pitch_scale to be the respective value of an Array of pitches we will define later on, and then we will play the AudioStreamPlayer2D.

This whole function will also use an argument(p) to know which index of the PITCHES Array shall be used, which in the case of Bard's Lesson, is the index of an InputEvent in the input action for interactions. 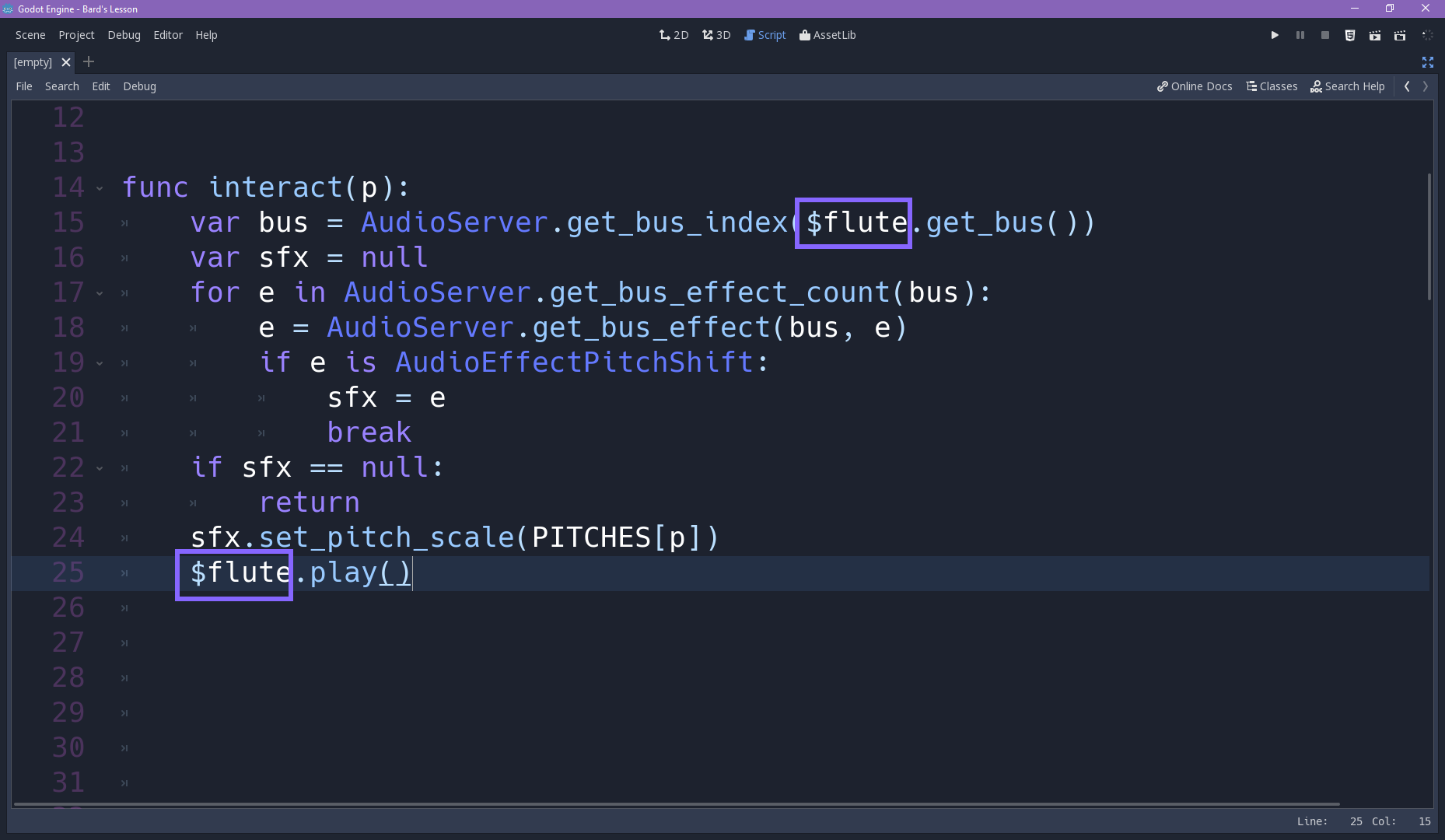 Note that since I'm using this script in the parent Node of the AudioStreamPlayer2D, in this case the flute node, I'm accessing it instead of calling the methods get_bus() and play() directly, if you are using this function as an extension of your AudioStreamPlayer, you can use these methods without referring to another Node.

Pitches of a Note Scale

In music theory every note is a frequency, i.e. a time based repetition. Every note has its own frequency but in order to create harmony between notes we use some specific intervals of frequencies which we call Scale.

A Scale is an ordered sequence of notes with different pitches in such a way that each different pitch can be expressed as a ratio, which we call interval. So in the case of a simple Major chord:

The interval between the Root Note and the other notes that form this harmony can be expressed as:

And now we already have our pitches to shift in our algorithm! So we will use an Array to store these float numbers and voila! 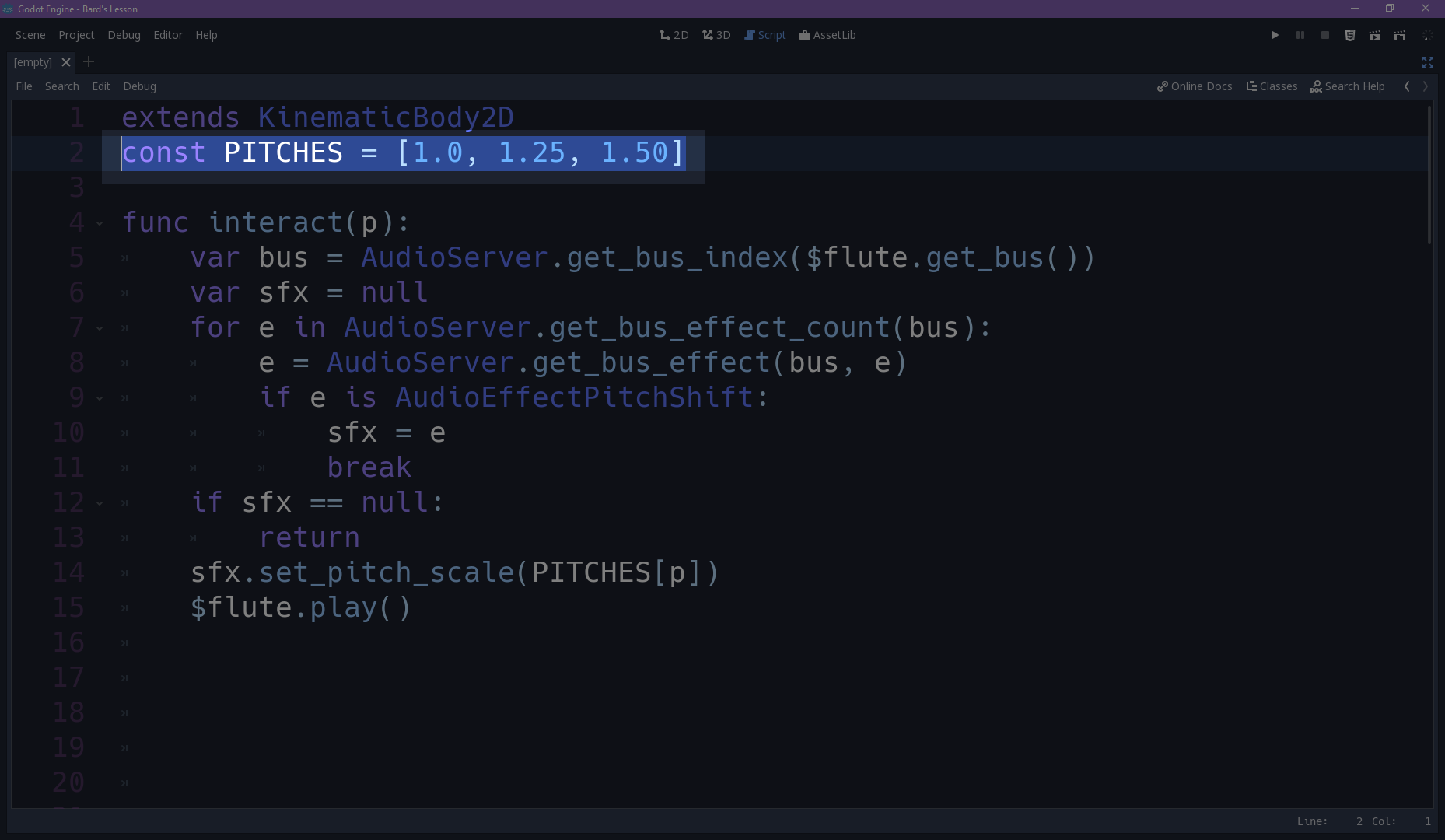 And since Juan implemented a very, very good algorithm to shift the pitch of an AudioSample that doesn't just compress its frequency (messing with the actual duration of the sample) we can securely shift the pitch knowing our sample will always have the expected duration. But in my case I did something more in order to it to have an undefined sustain...but this is a topic for another tutorial!

Bard's Lesson is a game about a bard fox and his journey to become a maestro, a master bard.

Thank you so much for having taken the time to write this tutorial! As someone learning how to use Godot to create musical games, this was a precious help.

This tutorial looks good but the images are broken. Could you upload the images to itch.io? Thanks