Yes, if you already know the PathFollow2D node you can see where we are going already, but keep reading because there’s a small trick to make this work with KinematicBody2Ds.

Let’s start from the beginning, we are going to create a scene with a Path2D node as root. This is the core of our platform movement designing toolkit. Through this node, we can create and design paths that can even contain curves!

[…] useful for making other nodes follow a path, without coding the movement pattern. For that, the nodes must be children of this node. The descendant nodes will then move accordingly when setting an offset in this node. 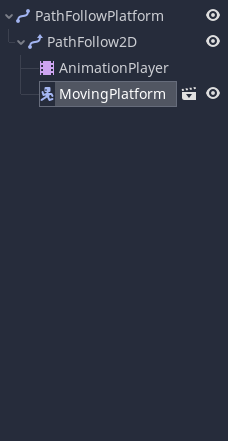 The way we can ensure that no matter the length of the Curve2D we create the PathFollow2D always runs through every point is by animating the Path2DFollow > Unit Offset property. This is a unitary version of the Offset property, meaning we can offset the Path2DFollow position in the curve using a value that always goes from 0.0 to 1.0, or rather, from 0% to 100%. So we can create an animation with a single track that interpolates this property along its duration. Don’t forget to change the Path2DFollow/AnimationPlayer > Process Mode to “Physics”.

Also, if you want the platform to always be moving, remember to toggle the Autoplay option on the animation to ensure it’s going to play when we load the game. Otherwise, you have to use some kind of trigger to make it play in the middle of the game, like an Area2D to make the platform move when the player is close.

Now if you try this out…it won’t work! Haha, gotcha. You thought there weren’t any secrets here, right? This is what happens if you try to test this setup as it is:

For some reason, the actual collision shape doesn’t get its position updated using this approach, which is quite unfortunate. But here goes the fix.

And with that, we fixed the issue! No, I don’t know how, I don’t know why it just works, there are some cases where we just need to accept that we don’t understand certain issues nor their solutions. Like why a wooden spoon prevents the pasta from boiling over, we just accept that it does and life goes on.

Now that we have our platform movement designing toolkit in place we just need to create new paths and see the magic happening. There are some notes to keep in mind tho:

A collection of gamedev experiments cut down to small digestible projects